• New app helps visually impaired students navigate UAA's campus (September 2019)
ANCHORAGE (KTUU) – A new type of technology from ClickAndGo Maps called the Wayfinding App is helping students who are visually impaired or have low vision the opportunity to get around a lot easier.

• Safe Passage: ADA kiosks and tactile maps guide the disabled (January 2017).
Article by By Lori Shridhare in Sign Builder Illustrated Magazine. "As a society, we are increasingly respecting the wayfinding needs of the disability community and understanding that we have an obligation to provide safe and reasonable access to public buildings, parks and public transit,” says Joe Cioffi.

• Indoor Airport Wayfinding for Blind and Visually Impaired Travelers (December 2016).
Technical report by the U.S. Department of Transportation's Federal Aviation Administration. "The advantage of the ClickandGo narrative mapping service is that the maps (comprised of verbal descriptions and high-contrast print and symbols) are designed by O&M professionals and customized to each facility."

We happily collaborate with news professionals from all media: television, newspaper, magazine, radio as well as community blogs and other independent sources. Feel free to reach out with your questions and interview requests or to source photos.

We are also happy to discuss participation in events and speaking engagements relevant to our community and industry. 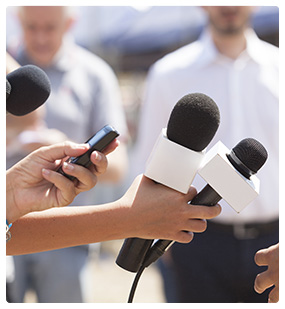 For blind riders on Metrorail, a new Web site and phone app are designed to lead the way
Washington Post on DC Metro: Nov 5, 2014