ClickAndGo Wayfinding is dedicated to bringing independent mobility to everyone--regardless of their ability and at no cost to the user. Seeing this philosophy embraced by the relevant communities has been exciting and gratifying.

Chapters of both the American Council of the Blind (ACB) and the National Federation of the Blind (NFB) have given ClickAndGo Wayfinding powerful endorsements. Our technology is licensed across a wide range of venues, including city parks, government facilities, hotels and transit environments, and adoption continues to grow exponentially.

The past few years have seen a dramatic rise in the interest governments and "big business" are showing in accessibility solutions and compliance. This, along with the advancement and commercialization of certain technologies, has set the stage for a new era of accessibility for the disabled. An era we're very excited to be part of.

Although we specialize in blindness wayfinding, our products address the needs of other user groups as well. These include travelers who use wheelchairs or who have memory challenges, as well as elderly and non-disabled travelers who simply have orientation challenges in complex environments.

Our dream is a world where universal, independent mobility is the natural standard. Everywhere. 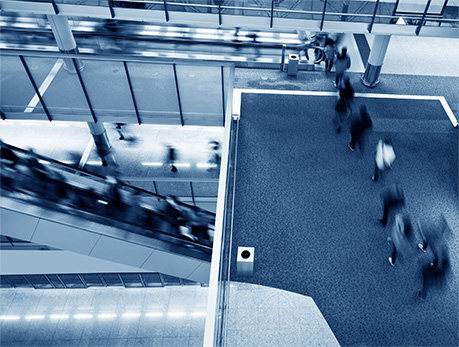 A Word from Joe Cioffi, Our CEO

I’ve spent over 30 years immersed in the deafblind world: as an advocate, a product developer, and a teacher of independent travel skills and tactile communication skills to deafblind youth and adults.

This work has taken me to Latin America, Europe, and Asia. In 1990, I launched InTouch Graphics, designing tactile-visual maps following an inclusive and universal design philosophy. In the years that followed, InTouch Graphics became a leader in tactile mapping and has since delivered hundreds of tactile maps to universities, transit venues, schools for the blind, museums, and other venues. InTouch Graphics is now partnered with ClickAndGo Wayfinding, combining the two companies’ products to provide powerful navigation solutions.

The individuals I’ve had the honor to teach over these past 3 decades have been inspiring. I’ve been humbled by their courage and determination to overcome overwhelming daily obstacles as they seek to broaden their independence and live their lives with dignity.

These years in deafblindness have coincided with the development of exciting mapping technologies that have had a huge impact on most of the world. However, they have not been developed to be even remotely accessible by deafblind users. In those few examples where devices have been designed with some accessible features, they have been priced far beyond the reach of the deafblind, who need them most.

My initial idea for ClickAndGo was to develop a technology exclusively for deafblind users, and one that would deliver accessible high-quality route information at no cost to the user. We soon after learned that we could expand this free service to blind users (“hearing-blind”). Still later, we broadened this vision to include wayfinding supports for wheelchair travelers. Now, we offer a service that can impact users of all abilities, delivering quality data to users on their own personal device, and at no cost.